SkyShed Observatories Owner & Designer Wayne Parker traveled to Afghanistan with his 1980’s Canadian rock band “Glass Tiger”, to meet with and entertain coalition troops. Wayne carried a PST solar scope everywhere he went and whenever possible set the scope up to show the sun to troops. The reaction from the troops was great, and it provided a few moments to take their minds off the war going on around them. Many service members were intrigued to see the desert sun for the first time through a scope.

Wayne says “We were honored and thankful for the privilege to spend time with frontline troops, and hopefully bring a little bit of home and a momentary repose to their lives, if only for a short time. Our philosophy in the band is that no one who’s sane supports war, but we have to support our men and women who are out there fighting for our freedoms.”

Read the full press story below.

ne of Canada’s most successful rock groups, Glass Tiger recently returned home from one tour they will never forget. The Toronto-based band was invited to visit Afghanistan by the Canadian military as part of a ‘Team Canada’ program that sees Canadian entertainers and former NHL hockey players provide a positive morale boost to the soldiers serving there. “Our mission was to lift the soldiers’ spirits for even a few brief moments, to show them Canada still cares, and to learn firsthand about what they are trying to accomplish in Afghanistan,” says Glass Tiger keyboardist Sam Reid.

Prior to their departure from Ottawa, the members of Glass Tiger met with General Walt Natynczyk, Chief of Defence Staff, who then accompanied the band throughout the trip. After their military flight to Afghanistan, the band visited several camps, touring the facilities, meeting not just the soldiers, but local children, the police force and Afghan military. They performed impromptu for soldiers serving literally on the front lines as well as at the main base, and presented a signed guitar to Brigadier General Jon Vance for ‘Canada House,’ the social meeting place for the troops.The visit of Glass Tiger and 13 NHL alumni coincided with the loss of three courageous Canadian soldiers in Afghanistan. After entertaining the troops with a set that fittingly included their international hit “Don’t Forget Me (When I’m Gone),” the band attended the ramp ceremony to farewell the three departed heroes. “It punctuates the reality of what they are dealing with here,” Glass Tiger keyboardist Sam Reid told Ottawa Sun reporter Chris Stevenson. Reid’s bandmate Alan Connelly notes that “we got to witness, first-hand, the emotional depth our Canadian forces in Afghanistan experience when seeing their fallen comrades off with a ramp ceremony at Kandahar Air Field,” adding that “I’ll never listen to the words of O’ Canada the same way again.” 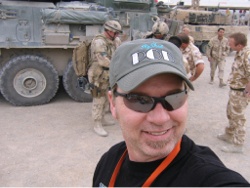 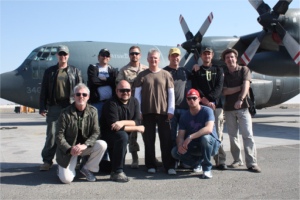 To Reid, this visit “brought the realization that our soldiers are there to make improvements in the basic quality of life for these people. We were in a place where a handful of little girls who get a chance to go to school are routinely punished or tortured for learning. Canadians have a long history of helping humans around the world, and here they are again in Afghanistan.”

The Chief of Defence Staff praised Glass Tiger’s efforts, calling them “true ambassadors. They achieved their mission of boosting troop morale with their solid performance and genuine interaction with our soldiers. We are grateful to them for giving their time and joining this memorable Team Canada visit.”

Glass Tiger pledge to tell their story to Canadian fans attending the band’s just commenced spring/summer tour that will take them right across the country. The rejuvenated band is as relevant as ever, 25 years into a memorable career that has earned them five Juno Awards, a Grammy nomination, two huge hit singles in the U.S. (“Don’t Forget Me” and “Someday”), and three Canadian platinum-selling albums, The Thin Red Line, Diamond Sun, and Simple Mission. Their own recent mission to Afghanistan was not simple, but was indeed a meaningful and life-changing experience.